This time I have planned to take my Royal Enfield from 79 feet from my home (Balurghat) to ~18000 feet at Gurudongmar Lake.

Gurudongmar, the name I heard first when I was at class VI. The lake is at 17800 feet  and  among the top 15 highest lakes in the world and is the second highest lake in Sikkim and also in India, the first being Cholamu lake at a height of 18000 ft. It is a lake which is considered sacred by both Buddhists and Sikhs. The lake is named after Guru Padmasambhava and also Guru Nanak, the spiritual leader of Sikhism while he had passed through this area, and hence regarded as sacred. The whole lake remains frozen except a small part of the lake area which stopped freezing during winter. The lake is about 5 kilometers to the south of the Chinese border .
I am accompanied with my three friends Partho, Biltu, Suman on this journey. 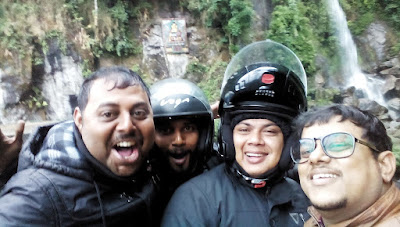 We ride through the NH34 covering Raiganj, Dalkhola and entered in to NH31 covering Islampur later Siliguri and entered into the Sikkim highway. The weather was not clear and we found wet areas at many places while going up to Gangtok. We ate local momos at the street near Rangpo.  We reached Gangtok- Capital of Sikkim.

We did shopping near M.G.Marg.

M.G.Marg  is famous for Chinese Feng Sui, Kukri and local Nepalese cloths . We dropped at a local shop, bought Nepali woolen cloths for my family and bought raincoats. Now days there you can see a mix culture of Bengalis, Punjabis, Marwari’s and Nepalese at Gangtok.
We stepped at a hotel nearer to M.G.Marg as our bikes were parked there. It began raining continuously whole night and we became worried about our trip.  Next morning we went to the tourism center for arranging our permits to Gurudongmar. Gurudongmar falls at North Sikkim. We stayed on that day and roam at the locals as the permit process took about 5 hours.


Our route to Gurudongmar is as follows: Gangtok to Mangan then  to  Chungthang then comes  Lachen and then Thangu and  atlast Gurudongmar. This whole route is divided into two part- Gangtok to Lachen and from Lachen to Gurudongmar. First day a long ups and down run of 120kms from Gangtok to Lachen.  It took about 7-8 hours as the roads were pathetic to drive. Actually there were no roads in some parts and we run our bikes into the 40 cms deep muddy and rocky terrain. It was raining at the month of November and my adventure gets wilder with the nature as we were covered with dust and mud. We had our lunch at Magnan and headed for Chungthang. It goes darker  after 17:30 and our trip becomes more wilder, more risky as we goes up the road conditions goes more pathetic. There were many check posts for entering the army area as the whole North Sikkim entrance is maintained by Indian Army.


We woke up at 5 am and got prepared for Gurudongmar. The distance between Lachen to Gurudongmar is 68kms. This time we will climb from 9500feet to 18000 feet. There were actually no roads but a pathway of boulders. As we climbs up the air gets dryer and we felt the scarcity of oxygen. Probably I won’t be able to express all of my feelings in words, because I don’t have any perfect words in my dictionary to explain the whole experiences. It was scary, attractive, dangerous and addictive. What else!!! Once you started you cannot stop. There cannot be any look back. I can still remember that the day before, from Magnan I saw a peak where I found snow started covering the peak, and during the journey I found suddenly, that stony masculine peak was just standing in front of me with its head up. I realized that the thin lines of snow were actually the snow layers covering the peak. I loved the way it was. It seemed to me that I was moving around my Guide friend and he was looking at me with full of its curiosity. We crossed few terrible land slide areas. We experienced some traumatic scene. 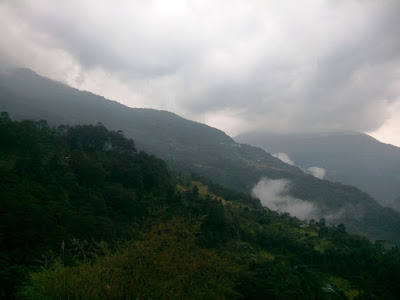 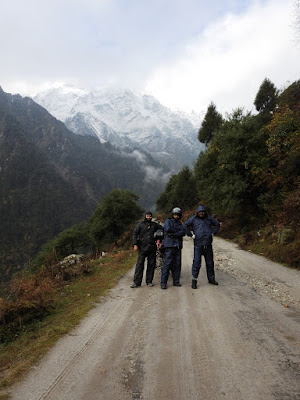 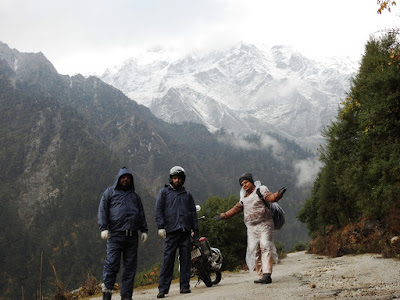 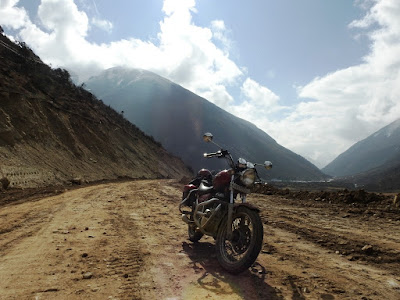 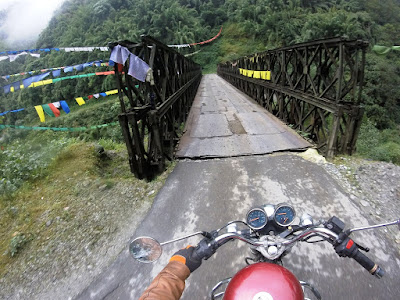 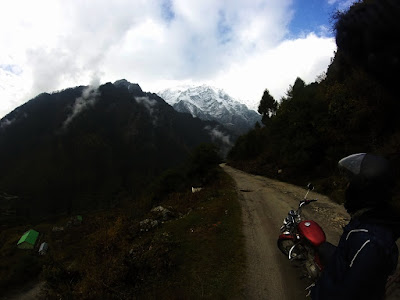 At around 10am we reached Thangu Village. Thangu is a small mountain village with countable families. I wish I could stay there few more time, I could hang around in the valley, and I could lie down on the green meadow. I closed my eyes, took a deep breath, hold it for few seconds grabbed the essence and moved forward.

We started towards north. We were continuously climbing up and realized soon after that we cannot see any more trees. It was all stony mountains covered with sticky green moss. Soon after we realized we had entered a region where snow fall had already started. Where ever I looked at it was all white. We reached almost at height 16000 ft. It was scary. All of a sudden I felt that we left the last localities far behind. We had almost finished three fourth of our journey. We were within the region of greater Himalaya. It was also a Himalayan plateau area. More we climbed up we entered deep inside the Himalayan plateau area. There was no road; it was a strange flat area. No sign of human being, no sign of any creatures. I was suffering from visual illusion. I was continuously within a dilemma that we have lost track. On our two sides Himalaya was standing like great wall. 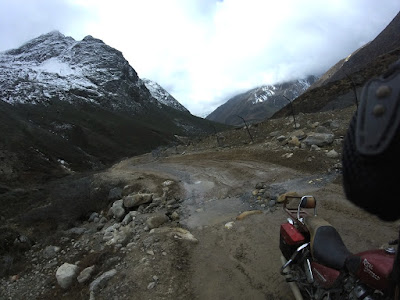 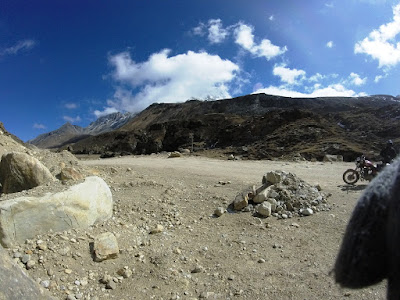 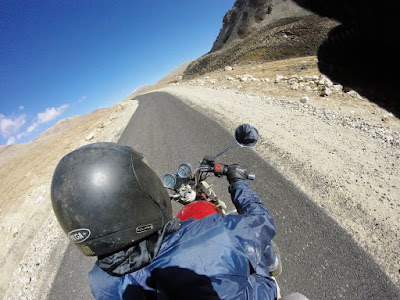 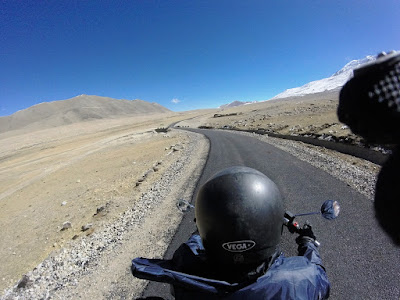 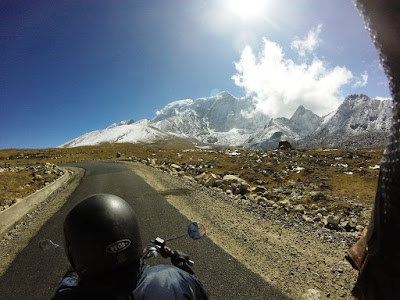 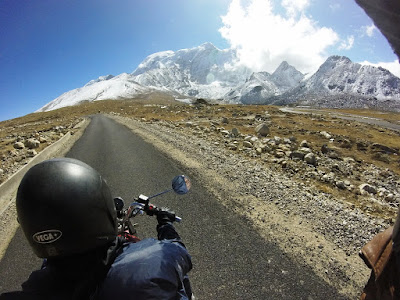 We reached Gurudongmar Lake at 12 pm. There were colourful prayers flag around the lake. The colour of Gurudongmar Lake was greenish blue. With the clouds clearing from the snow clad mountains besides it, the place was looking out of the world. I have no idea what heaven looks like, but it must be something like this. A major disadvantage of this trip is you do not seem to get enough time anywhere. Suman became sick due to high altitude and we had to climb down staying there just for 20 minutes. 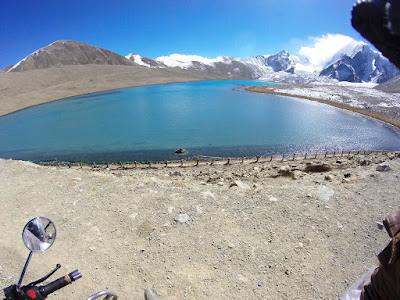 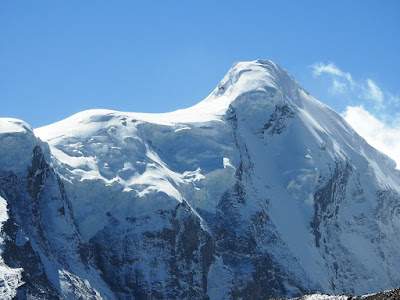 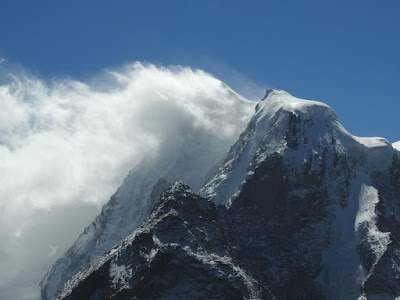 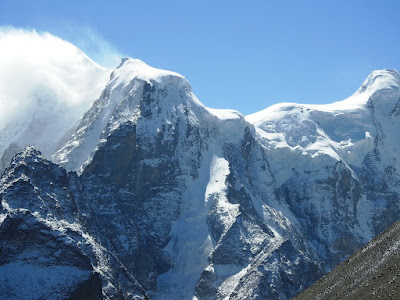 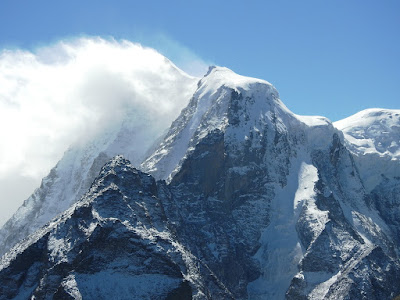 The sun was shining brightly and with great despair I started my bike. On our way back the valley was looking nothing less than Ladakh with the snow clad mountains shining on the horizon underneath the blue sky.

Going back I was feeling like having something extremely tasty but not having enough of it. 20 minutes in heaven was bit too less.

road to Gurudongmar---10 kms before 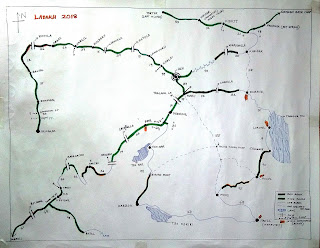 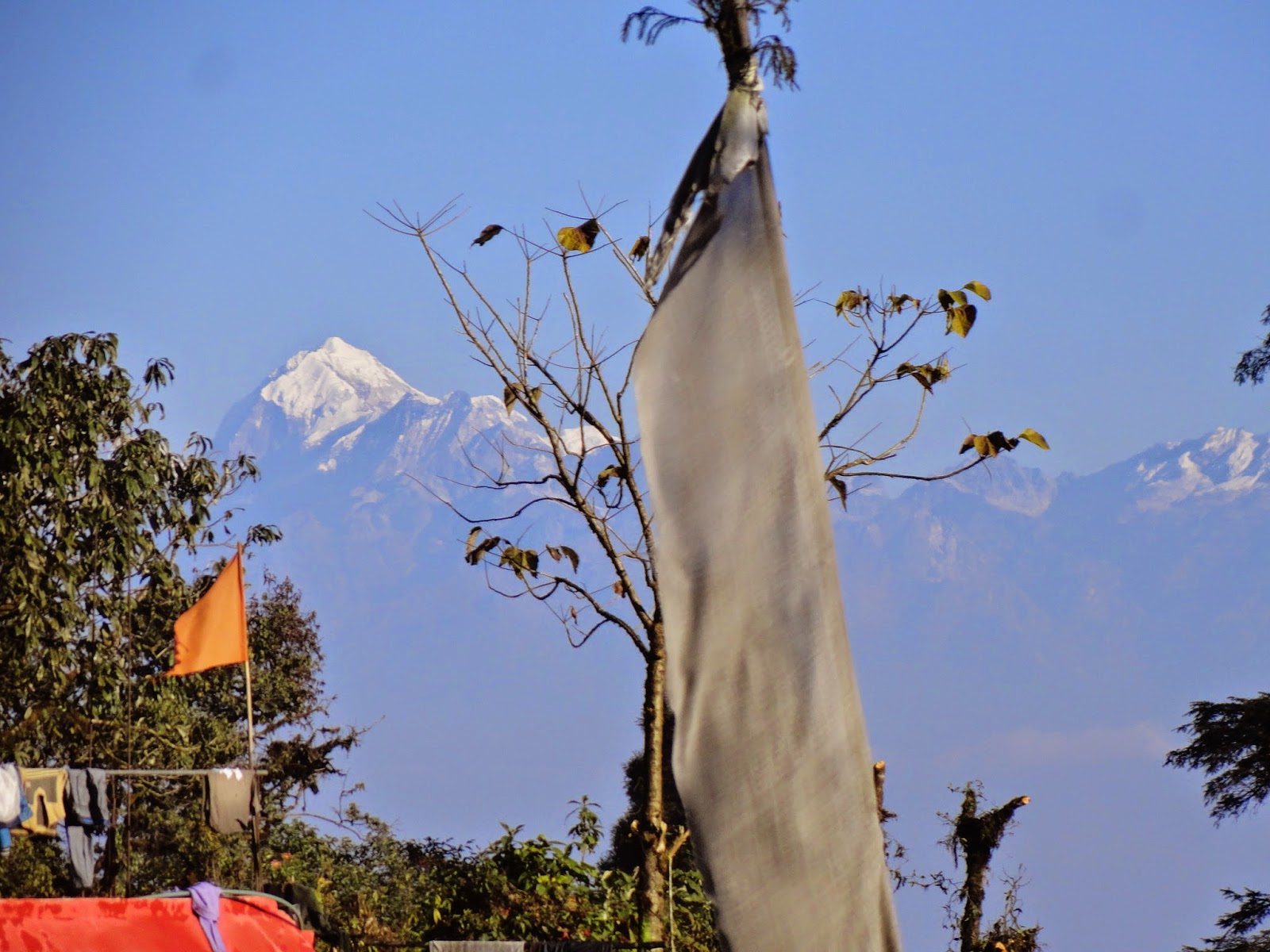